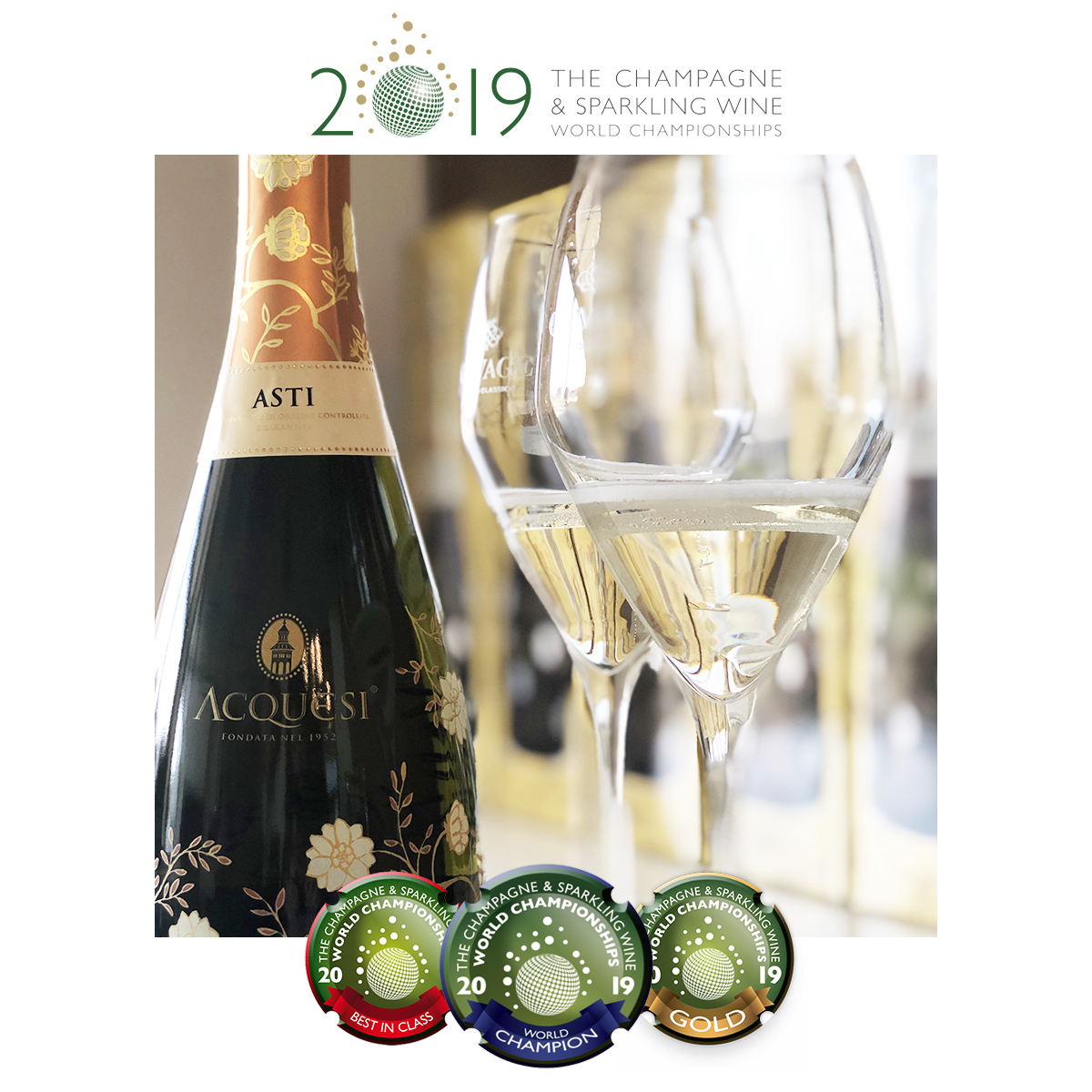 wines, has awarded the top award for the best aromatic sparkling wine to a wine produced by the Piedmont-based company Cuvage. The award ceremony was broadcast live on social media from London, Milan and Priocca, during the “Live Show Sparkling Night” evening organised by Cuvage, which is part of the Mondodelvino group.

Milan (MI), 4 November 2019 – Made from grapes grown in the vineyards on the hills around the city of Acqui Terme, a terroir historically suited to sparkling wine production, it is produced in the wine cellars of Cuvage and is part of the line of local wines under the Acquesi brand: Cuvage Asti DOCG “Acquesi”, ranked number one in the world in the Champagne & Sparkling Wine World Championships in the aromatic sparkling wine category, bringing greater prestige to the Piedmontese art of sparkling winemaking and conquering the stage in London.

This was the grand finale of the “Live Show Sparkling Night” held on 4 November and organised by Cuvage, the sparkling wine producer that is part of the Mondodelvino S.p.A. group. At the end of the evening, the winners of the famous international competition were announced, followed by a simultaneous live broadcast from London, Milan and Priocca (CN) in collaboration with Cantina Social, the international team of wine informers that has gained 100,000 followers in the last three years. An event where participants can discover the wines produced by Cuvage, the Piedmont-based winery founded in Acqui Terme in 2011, which uses native grape varieties to enhance a unique terroir and a historical tradition like that of sparkling wines. The evening dedicated to Cuvage, which opened with a Masterclass on the “King of aromatic wines from Piedmont”, held by Paolo Massobrio in collaboration with the oenologist Loris Gava, included a wine tasting dinner featuring the best sparkling wines produced by the winery.

For four years in a row, the wines produced by Cuvage have been tasted and rewarded by the highest authority on champagne and sparkling wines, Tom Stevenson, ending the 2019 edition with a great victory. In fact, this year, the Cuvage Asti DOCG “Acquesi” won as many as three awards: Best in Class Asti Dolce, Best Asti and World Champion Sparkling Aromatic, which was awarded for the first time ever in this category.

“It is an honour for us to receive this award, since it is an important recognition not only for our company but also for the whole Piedmont region, and for Italy too. It is a tribute to an ancient name that now deserves to be revamped.” These were the words of Alfeo Martini, founder and president of the Mondodelvino group.

The Cuvage Asti DOCG “Acquesi” is part of the local line that the company Cuvage dedicates to the city of Acqui Terme. This sparkling wine is produced by carefully selecting a complementary range of white Muscat grapes, grown in the marly-calcareous soil of the hills stretching from the Acqui area to Cossano Belbo with peaks in vineyards in the Mango area, according to the lengthy Martinotti Method (aged in an autoclave for at least four months). It is a straw yellow sparkling wine, with a fresh and intriguing bouquet with hints of white flowers, peaches and citrus peel. It is excellent paired with dry pastries, jam pies or stuffed baked peaches.

Group
Vision
Wine Experience
Ita | Eng | Cin
Seguici su
This site uses non-tracer technical cookies and third-party cookies with anonymous data transmission, in full compliance with current legislation; you can consent to the use of cookies, or consult the information for more information.I acceptRead the disclosure